La Corona Encantada (The Enchanted Crown) means the start of Relevo in the production of video games for 8-bit systems, creating a high-quality product and getting an impact on the general media as never seen before for an 8-bit game development like this: radio, newspaper, television… everyone got amazed by La Corona Encantada and its 80s Spanish game style.

With artist Alfonso Azpiri at the artwork department, who was responsible for many classic Spanish video game covers from Dinamic, Topo Soft and Opera, and with an excellent development team behind, La Corona Encantada gets a great atmosphere, just as if you’ve just bought the cassette game from your closest mall 25 years ago.

“Stories are told about the kings of the ancient country of Hyoth always wearing an enchanted crown that gave them the power to reign.”

“Once upon a time, the perfidious Royal Advisor, driven by his greed, instructed one of his henchmen to steal the crown. This, ignoring the warnings of the evil advisor, put the crown on his head…”

“The Enchanted Crown, feeling that its new master wasn’t in his right to wear it, invoked a terrible curse in the whole region and, as punishment, it transformed the body of the fool servant into golden coins and froze in ice the damsel who was destined to be the future queen.”

“Only gathering the 20 golden coins, the doors will open, where the traitor awaits impatiently for you, the rightful heir to the throne, to recover the lost crown to save your beloved…” 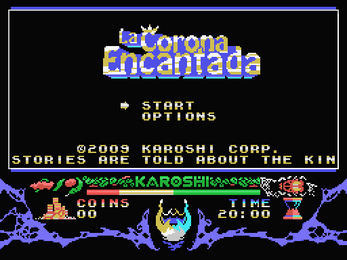 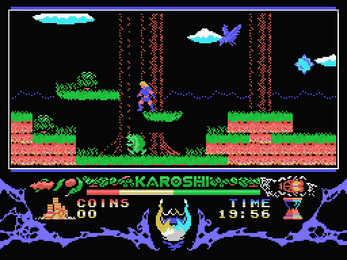 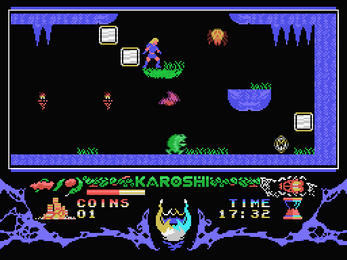 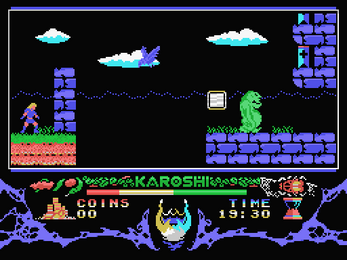